Examples of Notarisations and Certificates

The following list describes some examples of notarial certificates that we have recently provided to our clients. These include: 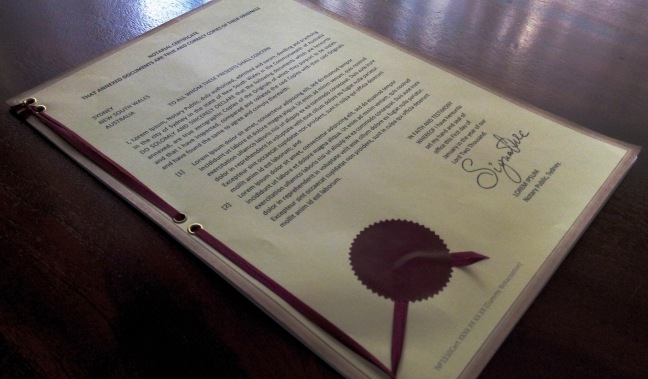 Above is an example of the form of a notarial certificate that we would draft for a client who requires a copy of various original documents to be sent to a foreign institution in circumstances where that institution demands that either originals or notarised copies be served to its offices.

The copies of the relevant documents would be collated and placed behind the notarial certificate which appears on the face of the bundle. The bundle would then be sewn together with silk ribbon along the spine. The ends of the ribbon would be placed under the red wafer before the notarial seal was applied to it. The notarial seal would then be applied over the signature of the notary who executed the certificate (see further: Notarial Seal). This is an example of a notarial act in the private form (see further: Public Form vs Private Form).

Some notarial acts do not require the drafting of a separate certification. For example, some official documents may already have a section included in their forms for the notary to simply sign and seal. Yet other circumstances may require that the terms of the notarial certificate may be applied to the relevant document by way of a rubber stamp, along with the notary’s signature and seal. How the notarial act is created depends on the circumstances of each case, and prospective clients should contact a notary first for information on how to best meet their business or personal needs. For more information on how we can asisst, see our Services Offered section.

The contents of this website is for the purposes of providing general information to the public and practitioners, and is not to be taken as legal advice.

All information that is presented on this website is current only at the time of its publication and may be subject to amendment or change pursuant to legal reform, policy change, or any developments in the profession of the notary public.

Visitors are encouraged to inquire with a notary before taking any steps with regard to their matter.